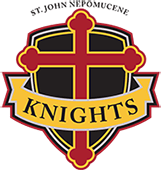 On December 8, 1885, the first Mass was celebrated at St. John Nepomucene Catholic Church in a 24’ x 30’ wooden structure that was erected on the current site. In 1891, under Fr. Klein’s direction, a sacristy and 32’ x 24’ annex were added to the existing building, doubling its size. The interior of the church was remodeled with new pews, side altars, statues, and a pulpit. Five lots adjoining the church were purchased for $200 in 1894 for future needs. When Bishop Bonacum returned in 1897, 110 parishioners were anticipating the Sacrament of Confirmation. In 1905 the existing wooden church was moved off its foundation and purchased for $553 and the new church was built on this same site. On July 25, 1906, the entire parish community celebrated the dedication of the new church. In 1915 the parishioners built a rectory east of the church for Fr. Bor, the first resident pastor, and all future priests.  In 1947 Fr. Otto Ekhaml had the supporting bars put in the church, the stained glass windows replaced, and a new church roof installed.

The doors of the St. John Nepomucene Catholic Grade School were opened to 56 students in September 1956 and Fr. Ekhaml recruited the Notre Dame Sisters of Omaha to staff the classrooms and reside in the convent. He served the parish and operated the school for 28 years. Fr. Paul York became pastor in 1974 and during his tenure, the church was extensively remodeled with parishioners volunteering to help paint, install carpeting and new pews, and update the interior of the church. In 2005 Fr. Tom Brouillette started a renovation of the school and the church, which was completed and on Sunday, June 5, 2011, Bishop Fabian Bruskewitz, along with Fr. Christopher Goodwin, celebrated Mass of Rededication and the 125th Anniversary of the church. At this Mass, he consecrated the altar with sacred chrism and performed special blessings in the church.  The school currently has over 85 students and is supported by parishes in Weston, Touhy, Prague, Plasi, Davey, and Valparaiso.

St. John was born, in answer to prayer, 1330, to poor parents, at Nepomuk in Bohemia. In gratitude they consecrated him to God; and his holy life as a priest led to his appointment as chaplain to the court of Emperor Wenceslaus, where he converted numbers by his preaching and example. To read more, click here.